Some months ago I decided that Casa Leon was not the name that I wanted for the house here on Isla Mujeres. I didn't want clients thinking a person named Leon owned the house. Leon in Spanish means lion, and at one point I was going to have a lion fountain spouting water into the pool. However the lion is gone along with the name. From Casa Leon, I pondered The Grotto - Beach House. I got mixed reactions. My father was appalled that I was going to name my house after a cave. I explained that grottoes were sometimes gardens and sometimes ornately decorated. Our house has so much stone work that the name really does fit well. However, as much as I had visions of candle light and monks in mysterious old ruins, I was afraid clients might have visions of cold, damp caves. And so I continued my quest for that name full of mystery and magic. While reading a foreign design magazine I ran across an article titled "Magi Azul." As soon as I saw that title I said, "Oh I love that!" And so Magi Azul - Caribe Beach House was born. My husband, Stan, then asked me, "What does that mean?" I said, "It means blue magic. Imagine the blue ocean, the blue sky and the magical beauty of it all." My husband, the consummate investigator, then does a web search and informs me that magic is magia in Spanish and that magi were wise men. I, however, was undeterred and a women with a passion. "It doesn't matter," I said. "It's a great name. The magi were star gazers, travelers and seekers of truth. It still works." Then I, the consummate researcher nerd, did a linguistic search and found that magi does indeed mean magic in Swedish! So all those visiting Swedes will know exactly what I mean! The rest of us will just think it's cool no matter what language it is. I tried to explain to Stan that it didn't have to have a specific definition. It is about the emotions the words evoke. The words even sound and feel beautiful rolling off your tongue. The g in Magi is pronounced like the g in genre (Maagjii Ahzzuul) Magi Azul. Didn't that feel good? So as house construction is coming to an end so is my search for a name I love. I have found it -
Magi Azul
~
Caribe Beach House.
Posted by Sherry Fauscett at 8:26 PM No comments:

"Blessed are those who endure to the end..." After building this house in Mexico that scripture has new meaning. The stress level from design decision making has subsided since we are so close to being finished, and it has been replaced by a different kind of stress. The term "over budget" doesn't even begin to express the disparity between the allotted funds planned for this project and the actual cost. I pray I will have enough dinero to buy my light fixtures. I now understand why there are so many houses halfway done in Mexico.
The last house we built in Mexico took Stan 8 months to complete. By the time construction was over Stan was so disgusted with being ripped off and paying bribes that he decided he didn't want to live in Mexico anymore. He slapped a "Se Vende" (For Sale) sign in the yard, and we sold it without me even getting to spend a night in it completed. Now we are not to that point yet, but lets just say that I can't wait for this to be over.
Right now I am sitting in a folding chair flanked by bags of cement and stacks of stone tiles in my future living room while I babysit tile setters to make sure they get the pattern right. Actually Julian is working on the tiles today, and I have more confidence in him with tile than anyone. Panso, the stone setter, is working on the 2nd floor garden wall, and Jose, my fantastic finish guy, is working on the poolside garden wall. As I move my chair to the ocean front patio I whisper, "Calgon take me away." The wind on my face and the sound of the surf do the trick, and I begin to imagine what life will be like when all the bags of concrete and workers are gone. Of course, all our money will be gone too, but let's not think about that. I think I will paint a primitive sign on some drift wood that says, "Don't Worry - Be Happy." Anyway, for now I will just sit by these bags of cement and dream of the day that I am eating guacamole by my pool with Sophia begging me to play shark with her. It will be here before I know it.
Posted by Sherry Fauscett at 10:45 AM 1 comment:

I should know this after 15 years, but it continues to amaze and annoy me. On a video I recently heard, "Is it possible to be astonished, but not surprised?" I would have to answer, " Si, Senor." Even my pastor (who is Mexican by the way) refers to time here as "Mexican time" and "American time." Mexican time is epitomized in the word "manana." It is an elusive term that is always in the future and never present tense. American time is generally in comparison - on time. I was raised with the ethical principle that 5 minutes early was on time, on time was late and 5 minutes late was VERY late. In Mexico this slogan is not even in the stratosphere. In Mexico "I'll be back in 2 hours" means "I'll be back in 2 days (if you are lucky.") "I'll be there manana" means, "I'll be there in one to two weeks." If they say they will be there next week, you are really screwed, because that means at least 2 weeks; and if they are a carpenter it means 2 months and still don't hold your breath!
I was dressing for my Taebo class that was "scheduled" to start at 8 am. About 7:45 I was packing up my gear to get to class by 8. I was packing the latest novel I was reading, so that I could fill the time till 8:20 when class would actually start. My husband said, "Why do you bother to get there early, when you know it will not start on time?" "It's principle," I say. In fact, I am not sure that the word "appointment" means the same thing when translated into Spanish. Yesterday we waited for a pool contractor to get a bid on a pool we want constructed at our home. In a weak, hurting economy, he never showed up for his "appointment."
Having whined and complained about this, I will say that although punctuality may not be the forte of the Mexican culture; there are other noble qualities I must note that make up for their transgression in tardiness. A Mexican will spend his last 300 pesos (if he has them) on a costume for his child for the local Spring festival. A Mexican will serve you the only lobster, while he eats fish. A Mexican will honor his mother and father. A Mexican will not leave church without kissing you, and saying, "Dios te vendiga (God bless you)," at least once and very possibly twice. I guess punctuality is not everything. In fact, here in Mexico I always feel good about myself. I have not always been the paragon of punctuality in the U.S., but here I am always early - by Mexico time that is. So as long as I pack a new novel in my purse, I just consider it an enrichment to my literary education. That being said, "I will write again manana - that means one to two weeks by Mexico time!"
Posted by Sherry Fauscett at 7:13 PM No comments: 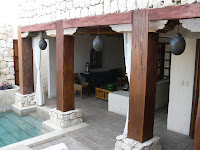 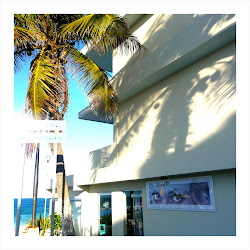